In the jailhouse of Palmerton 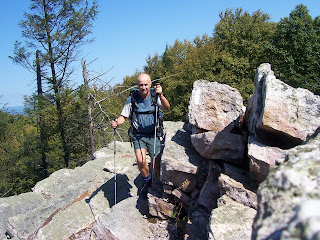 It has been a rather bad night sleep. I have been awakened by snoring and mumbling. We were six to share the shelter last night. When I said I am going to Palmerton tonight, my fellows are aghast. They plan to reach the town in two days. These twenty five miles are considered the toughest ones in Pennsylvania. Giant boulders, slippery slabs and razor-thin shrapnels make the experience unique. There is a reason for it. During the last ice age, glaciers advanced and retreated incessantly in that area.

The sky is clear and temperature is already mild when I leave the shelter. Just after the junction with the trail, I cross a pleasant campsite alongside a creek. Too bad! I would have got a restful sleep if I had spent the night here. Aware of my long journey, I set up a quick pace as soon as the trail climbs back to the ridge. The first three miles are rather easy. I clock them in an hour.

Suddenly I am stuck in a no-man’s-land. I hop from rock to rock to keep the momentum. At Dan’s Pulpit the view over the valley is restrained by surrounding trees. After a couple of rough miles, the trail surrenders to a gentle path; it follows Old Dresher Road for a while, then it resumes its savage trick at Balanced Rock, a majestic boulder dwarfing the trail. At Tri-county corner which happens to be the highest point of the day at 1674 feet, Old Dresher Road elope in a ravine. I look carefully the white blazes to stay the course in the third no-man’s-land. I check my watch. May be I'll have lunch at the pleasant Blue Mountain Inn at the crossing of a road. The dream is nurtured by a stop there five years ago.

At noon sharp, I arrive at PA309. I go right away to the front door of the property. Unfortunately the restaurant is closed on Tuesday. It is opened only from Thursday to Sunday. I don’t have time to swear at the unpleasant surprise as three young hikers are begging my help. Their cloths arouse my suspicion. They wear cut jeans and cheap army boots. Their bodies are tattooed and pierced everywhere conceivable. They look like more bums than hikers.
“Is there any water Sir?” The begging voice and the polite Sir lower my guard.
“We are looking around for no avail”, adds the second guy with his tattooed arms while the girl, pierced on the lips, stay mute.
“Follow me guys!” Without any hesitation, I lead them to a spigot located in the backyard of the property. That’s where I took shelter five years ago during a rainy day. The kids thank me deeply. I nod my head in return.

There is a table and two benches under the shade. I start eating my snack. My fellow hikers are more interested to wash themselves than to drink. The girl starts washing herself in front of me. She does it with simplicity. I don’t mind. She is plump but taller than her two partners. One says to her:”Wash yourself everywhere! I don’t want you stink anymore!” She smiles. The second guy cleans up a black pan. How do they carry such heavy staff on the trail? After a while, I venture to ask them what they are doing on the trail.
“We start in New Jersey ten days ago and we are going to Florida”, answers the arms tattooed guy.
“Really?” I said.
“Yes, we are on the dole. We don’t have enough money to go there with a bus. When we get there, our friends will help us to find a job.”
“Do you have any idea how long it will take you?”
“Well, we hope to be there to celebrate New Years’ Eve."
“How many miles a day do you expect to hike?”
“We do ten miles a day.”
“At that pace you won’t be there before next year. You’ll get snow in Great Smokey Mountains.”
My rational answers can’t deflect his high spirit. The girl is now washing her hair. She is bending her neck to do it. The second guy, which happens to be the brother of the first one, is cleaning a greasy pot.
The talkative guy adds “We spend seventy dollars a week. We eat rice most of the time.”
Their heroic stance alters my judgmental attitude. Why to warn them of the cold nights they will endure soon? Let them have fun! Don’t spoil their pleasure!
“I play guitar every night around a ring fire”, said the arms-tattooed guy.
“Are you carrying it?”
“Yes, I do. Look at it on the front porch.”
As the girl is bending sideways, I can see now her wet bosom. She makes me giddy. It’s time to leave.

Just after going back to the trail, I encounter two South-bounders. I ask to the first one if the trail is very rocky to Palmerton. “Not much outside the three lookouts.” Had he sensed my anxiety? I am concerned for a good reason. My shoes are busted. They won’t go to Hanover as I expected. I need to replace them. Should I reduce my pace? The first Outfitter is at Delaware Gap, which is fifty miles away. I have been through worst time in the past. In 2005, I was hiking on the Pacific Crest Trail when my shoes busted. I used Duct Tape to cover the holes. When it rained, it was a bad day for my feet. It snowed three times and my feet were icy... So I’ll cope with them till Delaware Gap.

The trail climbs to the Knife Edge. The crest is covered of slabs. With my worn out shoes, I am careful to keep my balance on the sharp crest, hence the name of the hill. At the top of the mountain I take a picture of myself with the help of a timer on the camera. There is nobody around. I put the camera on a flat rock and wait for the end of the flashing red light. It’s done.

The downhill is straight. There isn’t much walk before the next challenge at Bears Rock. It is hot when I reach the unsheltered slopes of the summit. A hawk is circling in the blue sky. It is a perfect Indian summer day. I take others pictures.

The trail goes down to a gap and resumes its ascent to Bake Oven. I hear voices at the summit. There are four birdwatchers with their binoculars. I stop to drink. My legs are tired. I decide to sit for a while. The birdwatchers engage a talk. They are conducting a survey of raptors. While I look around while listening them, I am disgusted by painted rocks and also by trash left in a crack between rocks. I tell my disappointment to the birdwatchers. A blond guy wearing a mustache said kids are partying sometimes here. The vicinity of a road explains it. Five years ago the lookout was still pristine. Should the road be closed? It is the best option as pigs don’t like walking much from their cars. A birdwatcher explains me the variety of raptors in the area. When I leave the group, I don’t know where I should resume the trail Northbound. “It is just where you find the trash”. The downhill is not very steep. My legs appreciate it. At a side trail, I see a prairie where a big property is being erected. Too bad! Encroachment is the biggest challenge for the protection of the trail.

I resume my fast pace when the treacherous rocky field ends. An hour later comes another prairie which offers a good view on both sides of the mountain. On the north I can see a snaking river making its way through a high plateau; on the south, Pennsylvania Turnpike. The sun declines on the horizon. I accelerate my pace. Hitchhiking requires daylight. Palmerton is two miles and half away from the trail. Can I spare these extra miles on a paved road?

At 7pm, I cross the bridge above Lehig River. To increase my chance, I want to hitchhike at a parking lot where cars might stop. It is located at the summit of a hill. I don’t wait too long. A car stops. His driver is a salesman. He accepts to drop me in town. Palmerton is half a mile away from the exit of highway. I thank him. I resume walking on Main Street. My feet are caked by concrete on the sidewalk.

After the crossing of a railway bridge comes Palmerton Hotel. It is a busy place. All tables are occupied. I ask a room at the front desk.
“No Sir, we are sold out tonight. Do you want to sleep at the jailhouse?”
Such a question might need some explanation. In fact, the police station offers a free night sleep, in their basement, to every hiker stopping in town.

After gulping a beer, I resume my hike to the police station. I ring the bell. No answer. I have been told the police patrol is busy. I decide to have dinner at nearby Bert’s Steak House while waiting the return of the patrol-car. It is a restaurant serving a decent American food. After the meal, I ask my waitress what I should do.
“I’ll call 911 for you.”
“Oh, please, don’t do that! I don’t want to disturb an emergency service for no avail.”
“Well, I’ll find out the number of the police for you.”
She calls. No answer. She leaves a message. I wait for a while before going back to the police station. There is a light inside the building. I ring the bell. No answer. I am shivering in the cool air. I need a shower after sweating so much. If there is no answer next time, I’ll sleep on a bench like a bum. At the second ring of the bell shows up a policeman. He lets me go inside. He registers my name and address after checking my passport. He picks up a flash light and guides me to another building.
“You won’t go out by this door. I’ll lock it. Use the one in the basement.”
We go downstairs. The policeman finds a switch light. The room is huge and sparsely furnished of a table and three bunks.
“I’ll show you the bathroom and toilet upstairs.”
He leads me again with the help of flash light. We cross a basketball room and then arrive to the bathroom.
“Ok?”
“Yes Sir, I am very pleased to sleep here tonight.”
“Don’t forget to turn off the light! The personal is coming at eight o’clock.”

After a shower, I am the happiest tenant of Jailhouse hostel. God bless America!
Publié par Bernard Martoïa à l'adresse 21:58