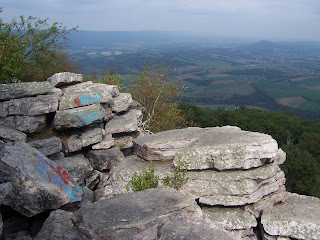 The Pinnacle tarnished by spray painting

While wandering on the trail for eleven days, I want to know if I am on track to reach Hanover before deadline. Whatsoever happens to me, I must quit the trail no later than October 19. I have bought a guidebook which contains a database. So far I am thirteen miles behind my scheduled pace.

After paying tribute to Charles Breon at the cemetery of Port Clinton where he is buried, I leave for good the town. I am confident for two reasons. I am back in known territory, as I have already hiked southbound to that town, and I have bought a new guidebook. I am planning my future move: an easy stage of fifteen miles today and a more laboring one of twenty five miles tomorrow. Why shouldn’t I plan two equal stages of twenty miles each? Hiking a fixed distance would oblige me to camp anywhere. The appeal of a good campsite or a diner in town can’t be easily discarded. Fifteen miles is the distance between Port Clinton and the shelter of Eckville and twenty five miles the one between Eckville and the town of Palmerton.

It is nearly 11am when I start alongside beautiful Schuylkill River. It is an easy walk during a couple of miles. My headache is going away when the trail veers to the rocky ridge. I come across two hikers in the vicinity of Minehanna spring. We just say hello to each other. The spring is dry but everyone has enough water. The trail goes up and down steep slopes for a while. My legs don’t like it.

Finally I reach the top of the ridge. I am blessed with a good view on a sunny valley with pastures. The ridge juts out. This southern balcony is a sanctuary for raptors. According to the latest data available in 2008, more than twelve thousand birds have gone through the cliff at the Pinnacle. The Pinnacle can’t be seen from where I stand. It is much further south from here. My first lookout is at Pupil rock. The trail meanders through a treacherous karstic plateau. Despite an excellent view on the valley, I am watching my steps. Sometimes, I jump from rock to rock to avoid a crevasse. This exercise requires tempo and shrewdness.

I am sweating when I arrive at Pupil rock. I drop my backpack and drink plenty. While taking a picture I am annoyed by a bug on my arm. I slap it and return to my photography. Another bug bites my skull. When looking above my head, I realize that the overhanging tree is swarming with bedbugs. I scamper. My backpack is also attracting these nasty bugs. They stink when I crash them. I rush to a safe rock. Several black hawks are circling in the sky. Sometimes I hear the swish of their wings when they dive the cliff.

I resume my hike toward the Pinnacle. The trail follows the ridge. I should know when I am there as the Pinnacle is the most advanced rock to the South. There is an increase of raptors in the sky. Finally I am nearly there when I arrive at a side trail. As I have to come back later, I drop my backpack. I just carry my camera. My excitement increases as the view widens. The Pinnacle is like the bow of Titanic. To my disappointment, it has been tarnished by spray painting. Some young nerds wanted probably to leave their mark for posterity.

The Pinnacle is one of the best balconies of the entire trail. Which other match it in beauty? Charlie’s Bunion in Tennessee, McAffee knob in Virginia or Race Mountain in Massachusetts? There is no definite answer as each one has a different appeal. I was blessed by a sunset at McAffee knob. More, I was alone that day, a rare occurrence, as it is one of the most visited places. I didn’t do it on purpose. I was late that day. On a long journey it is impossible to predict where you’ll be on a specific day. Dozens of hawks are circling the Pinnacle.

During the migrating season, one hundred and fifty birds a day on average go by this legendary cliff. In 1934, Rosalie Edge leased 1400 acres. She installed a warden on the property, a bird enthusiast named Maurice Broun who, with his wife Irma, protected the birds. The shooting of birds decreased sharply. A year later, Mrs Edge opened the sanctuary to the public. In 1938 the State of Pennsylvania bought the land and secured the sanctuary for future generations.

When I return to my backpack, I can’t find my ski poles. Where are they? I can’t figure out. I err for ten long minutes. My anxiety increases. I find the gray poles nearby a pyramid of rocks of the same color.

Back on the trail, it is an easy five miles hike to Eckville through a jeep road. I cross a magnificent virgin forest. It has been spared from logging because of its difficult access in a gorge. At 5 pm I reach the road to Eckville. The shelter is 0.2 miles away. It is located in a private property. There is a cold shower in a separate bunker. The shelter is clean because the caretaker next door is doing his job with gusto. Only hikers are allowed to stay. Drivers are turned down by the vigilant caretaker. We’ll be five people tonight. For the first time I meet north-bounders on the trail. They are cheerful and talkative at the table outside where we share diner. We exchange our past experiences by a pleasant evening.

Five years earlier it was a frightening night. It was pouring rain and gusts of wind of eighty miles an hour. A hurricane was crossing the area. We were only two inside the shelter: a guy from Saint Louis and me. I have a vivid memory of this guy. He was in his sixties. Twice a year he was hiking a section of the trail: a week mid-April and another week mid-October. He hated bugs and mosquitoes. That’s why he hiked so early or so late in the season. His schedule was tight. He was driving to the end of his one hundred miles section where a shuttle was waiting for him. He was driven back where he had left the trail six months before. And when he reached his car, a week later, he allowed himself a night at a hotel before driving back home. It was a very long drive to Saint Louis.

I have never seen a man more dedicated to the trail. He excused himself for not being talkative. His job was too consuming. He was a computer geek helping clients on the phone. After having diner, he went to bed early. I remember when he left the shelter at daylight. He was moving fast despite fallen branches. Most of the kids on the trail have too much time to stay focused. They have no goal. They don’t complete the trail in one season because they don’t have the discipline to hike only fifteen miles a day. They congregate in town where they chat and drink beers. One should be young enough to waste his time, a luxury the old guy from Saint Louis couldn’t afford. It was his seventh year on the trail.
Publié par Bernard Martoïa à l'adresse 21:32