Honor to a veteran of the Second World War 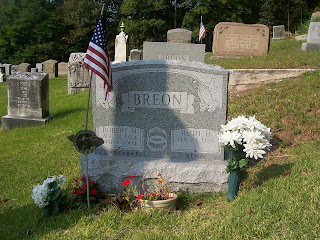 The saloon of Port Clinton hotel is crowded on Sunday’s afternoon. Motor bikers wearing their usual black’s leather clothes congregate in the former stagecoach. Opened in the early 1800’s, “Gately hotel”, under its birth name, was a stop between Reading and Pottsville. Travelers still like to stop at Port Clinton. The hamlet is squeezed alongside a busy road and Schuylkill River. Amblers and hikers stroll on the bank of a clear blue stream. It is said that twelve year old Daniel Boone, who was born in the vicinity, once got lost and camped overnight on the riverbank near where the trail crosses a bridge into town.

In the crowd, the bartender quickly notices my presence. He invites me to let my backpack outside the establishment. Backpackers are not welcomed here. Despite a hostile attitude toward hikers, I give in. I need a room and a shower. The boss shows up. He is a burly man. He gives me a key of a room, a towel and a tiny bar of soap after I have paid the room with my credit card. He is too busy to guide me to the bedroom.

By a backdoor, I climb squeaking wooden stairs leading to the hotel’s rooms. I hear music coming from a half closed door. My room is old furnished and dusty. I toss out camping gears inside a dark wood chest of drawers. There is only one bathroom for the entire floor. A cleaning lady is vacuuming a derelict carpet when I walk out of my room with a waist-high towel. The bathroom is filthy. When washed and shaved, I am ready to have a beer at the bar. According to the Through-Hiker’s handbook: “owners request you shower before dining.” The bartender invites me to give him my dirty clothes now. “Laundry closes at 5pm on Sunday” he said while mopping the bar. I turn down his offer. I only have short pants, tee-shirt, gaiters and socks that I hand wash daily with a biodegradable soap. Despite a warm afternoon, I am condemned to wear long sleeve’s orange shirt and long black silk pants. My only luxury is a pair of sandals. Distance obliged, I am taking a great care of my feet.

When motor bikers leave for good the place, we are only a few customers left. A middle-aged couple is seated to my right at the bar. They eat with gusto a despicable meal. Disgusted by the greasy food, I indulge in too many beers for my dehydrated body. I’ll surely wake up with a terrible migraine tomorrow morning. It is only 5pm when I fork out.

What to do now? I can’t go back to my despairing room. Five years earlier, I would had been glad to find a room. There was no vacancy at Port Clinton hotel. The last room available was taken by a woman I met a week before on the trail. She was ahead of me. We had a good chattering at the bar. She was a nurse at Flagstaff in Arizona. Her boyfriend was working on the East Coast. He wasn’t interested to hike the trail wit her. She started northbound with her young brother. Quickly left behind, she struggled to end up in style in Maine. At mid-summer, she was only at Harpers Ferry, which is not yet half-way through her journey. She decided to flip-flop southbound. It was mid-October when I met her on the trail in the state of New Jersey. On her advice we had slept at Camp Mohican. It is operated by Appalachian Mountain Club. A loud-mouthed weekender ruined our night sleep. This time, she invited me to share her bedroom. I would had slept on the floor. I turned down her offer as she needed a good night sleep before resuming her hike. She had still two hundred miles to go. She wanted to finish her adventure before Thanksgiving. Mine was over. I had to wake up early to catch up a bus bringing me back to New York.

A veteran of Second World War helped me to find out the schedule of the bus. On the advice of a lady working at nearby peanut shop, I had knocked to his door. He made several calls to find out connecting bus schedules from Port Clinton to New York. He spent a great deal of time to check up the schedules. Robert Brion, of French ancestors, had lived all his marital life in Port Clinton. He had warned me to be no later than 6am in front of peanut shop. Port Clinton is a flag stop on the bus line. I slept on the riverbank. My night was marred by the roaring noise of trucks. At 6am, while waiting for the bus coming from Pottsville, Robert Brion wearing a bathrobe and slippers showed up with a cup of coffee. He offered me to drink it. He knew I was sleeping outside. He was concerned by my health on that first freezing night. We chatted while waiting for the late bus. He told me his harsh experience as prisoner of war. I never forgot his smiling face and his polite talk despite his failing health. He confessed me having a cancer. I wanted to give him a rain check. I promised to come back the year after. Unfortunately, I didn’t come back neither in 2004 nor the year after...

Five years later, I am back to his door. I knock it. No answer. The house looks empty. Anxious to know the truth, I inquire at nearby peanut shop. The lady tells me his passing which happened several years ago. She can’t remember the date. I come back downhearted to Port Clinton hotel. The boss also remembers him very well:” a very nice person!” Like the lady, his memory is failing. He can’t remember when he passed away. The uncertain date of his passing causes me anguish. Did he pass away before or after my false promise ? I ask the boss if he is buried in town. “Oh yes, he’s there. He has even his brass at the monument. He was a veteran. To go the cemetery, cross the bridge and turn right after it, climb half a mile on a dead end road. The cemetery is at the top of the hill.” I am too tired to climb the hill by a hot afternoon. I will pay my tribute tomorrow morning before leaving town.

I decide to pay a visit to Ye Olde Backpacker. I need to replace my lost handbook. The outfitter is located on the second floor of an old plant. My legs hurt when I climb the steep staircases. A boy is in charge of the Outfitter. In that quiet Sunday afternoon, he replaces his mother. I find another handbook. It is an updated version. The 2008 edition is the eight one! I need another pair of socks. There are only short ones on the rack. I am skeptical on their usefulness as gaiters will rub my lower calves. Between two evils, I choose the merest. Better to have socks rubbing my skin than no socks at all! My boots are worn out by the rugged trail. I still hope to go with them to Hanover, a distant five hundred miles from here. I refill my canister with denatured alcohol and I buy a new bottle of biodegradable soap. The Outfitter is selling ice cream. I check the empty tank. At the bottom, I find a cup of strawberry sorbet. When I pay the bill, the lady owner shows up. I ask her if short socks are worthwhile. “A lot of hikers are using them now!” There is a reason behind it. Most young hikers don’t wear boots anymore. They prefer lower running shoes. She asks her son if everything went well during her absence. The boy is relieved. He has no interest in the business of his mother.

On the next day, I wake up with a headache. All night a loud music was played downstairs. The noise came from the restaurant. Has some one forgotten to turn off the juke box? I inquire to a cleaning lady. She has the key of the closed bar. Yes ! The juke box was still playing for no reason. After a bad night sleep, I am in a grouch mood. The lady shares my misery. She invites me to write a letter and to ask a rebate on my bill. She provides me paper, envelope and pen. Despite my migraine, I manage to write a full page. On her advice, I drop the letter under the door of the bar. The bar is closed on Monday.

There is only one restaurant opened today. It is a mile away north of town. The walk and the cool air alongside the riverbank soothe my migraine. It is a good restaurant for breakfast. I order my favorite meal: fried eggs, hash browns, sausage, crispy bacon, orange juice and coffee. After three cups of coffee, I feel all right. It is time to go to the cemetery.

The cemetery is at the top of a hill where there is a good view on the valley. As I have no idea where Charles Brion is buried, I check every alley. Finally, I find his gravestone. "Robert Brion, August 12, 1924 - March 1, 2004". Despite my failed promise, I had no chance to meet again the old gentleman. He passed away less than five months after our acquaintance. Beside is written Ruth Brion, born Clay, February 24 1926. I have been told the widow is living in a nursing home. She has got a knee cap replacement. Ruth is ready to join her beloved husband in paradise. One need only to engrave her last day on earth on the gravestone.
Publié par Bernard Martoïa à l'adresse 07:07