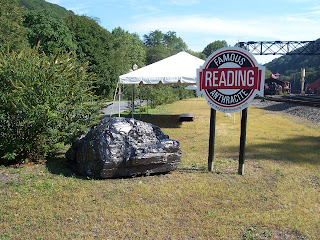 Despite a late arrival, I am awakening at dawn. When I get out of the tent, I realize that I have missed a better campsite in the darkness. Should I regret it? Not as I have slept correctly. Today I am impatient to close a gap at Port Clinton. Indeed I was there six years earlier when I was hiking southbound the trail. I am lured by the prospect of returning to a known place.

Before leaving camp, I fill two bottles of water as I have no map to tell me if there is a spring. I also don’t know the distance to Port Clinton. I think I am probably less than twenty miles away. At 7.30 am I am departing, with a little frustration, from beautiful Hertlein campsite where I would had enjoyed a pleasant evening if I didn’t err six miles for no avail. Without map or guidebook, I am moving carefully. The first couple of hours are uneventful in the forest till I reach a clearing basked by the sun light.

There is a marker. What is it? On this site was erected Fort Dietrich Snyder. It was an outpost for English troops during the French and Indian War, which is also known as the Seven Year’s War (1756-1763). After crossing battlefields of the Secession War in Maryland, here starts another piece of land harshly fought earlier. The English were settled alongside the Coast. It was too narrow for the unending stream of European immigrants. They wanted to settle westward but they clashed with French Empire which stretched from the Great Lakes to the mouth of Mississippi. It was during that war that scalping occurred on a large scale. Indians were mercenaries to the French army. They collected scalps in order to be paid. Outrage was not a French monopoly. Following a massacre committed by Mi’kmap in 1749, Governor Edward Cornwallis issued a bounty on the heads of Mi’kmap.

A side trail goes to a spring. My water supply is still intact. A quarter mile later, I reach a parking lot at PA183. The road is empty on Sunday morning. After the crossing of the road, the trail goes back to secluded woods. I come across four south-bounders. We chat for a while. The two young couples are native from Michigan. I am told that Port Clinton is roughly ten miles away. I glance at my watch to figure out at what time I can reach it. I should be there in the middle of afternoon. Later I meet several hikers on the trail. Am I the only guy going northbound this year? My impatience increases with the faint noise of Interstate. I stop at Auburn lookout. I check my multitask watch. It is 23°C or 74°F. I drink my last liter of water. I gamble my comfort zone for the remaining miles.

Auburn lookout is a natural clearing. It is another giant boulder’s field. Pennsylvania is considered the worst section of the trail for a good reason. During the last ice age, glaciers advanced and retreated in that area. They did not stay long enough to iron out the rocks but they advanced enough to break up the rocks. Repetitive freeze-thaw cycles subjected the ridge-crest rocks to ice wedging in open, water-saturated fractures. Rocks broke away and slid down the slopes where they accumulated as large masses of talus (scree). Broken, angular rock fragments and broken outcrops common along the Mountain Blue Ridge are a product of this ice age.

The trail crosses several times a jeep road. It is tempting to follow the gentle road instead the bumpy trail. As a purist, I stick to the trail. I cross a pipeline where I have a good view of the valley. Finally, the trail goes down to Schuylkill River. It is very steep at the bottom.

I stop at the train station for a good reason. There are three old steam engine locomotives with a car attached to each one. The separate tender of one locomotive wears the name of Blue Mountain & Reading Company. It was filled with the best coal in the world. A huge block of anthracite lays twenty feet away from the rail track. A sign post says it is the “famous Reading Anthracite.” Anthracite is a glaring coal. It has the highest carbon density (between 92% and 98%) amid mineral coals.

I swoon in front of the huge block of anthracite. Should I pick up a bit as keepsake? The train station is closed to the public and there is just a sleepy traffic controller at a nearby tower. Nobody will notice my petty theft. As I try with my tiny pocket knife, the blade cannot slice it. Anthracite is as hard as diamond, which is another carbon mineral. It is also too hot to stay nearby. I give up. I wipe beads of sweat on the forehead with my forearm. Is it not time to have a cold beer in town?
Publié par Bernard Martoïa à l'adresse 17:54