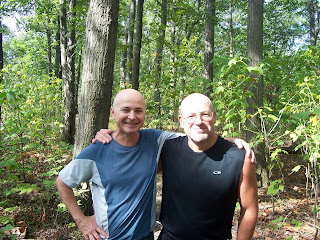 Last evening I froze, three times, the injured calf with a plastic bag filled with ice cubes. Each period lasted half an hour. The leg was numb but today I feel better. The calf doesn’t hurt anymore.

The bedroom is equipped with a small kitchen. While sipping coffee, I watch forecast on Weather Channel and market news on CNBC. The prognosis is much better for Pennsylvania than for Wall Street: sunny sky in the first area, ominous dark clouds gathering for the second… Futures are in negative territory.

Yesterday I read in the Wall Street Journal the turmoil sparked by the bankruptcy of Lehman Brothers, which happened five days ago. I have escaped a week of anxiety. After the injured leg, this is another worry. Despite the ominous gathering of dark clouds above Wall Street, I can’t make up my mind. I take comfort in dubious analogy: weather and market are two dynamical systems whose state has been described by the theory of chaos. Why should I worry for something which is out of control? While being errand, it is difficult to make a sound judgment. I prefer to focus my attention on the trail. My goal is to reach Hanover, at the border of New Hampshire, which is 564 miles away from Swatara Gap.

A pick-up stops. I drop my backpack in the open cargo. The drive to the trail is too short to engage a meaningful talk with my driver. It is 10 am when I resume the trail at a pedestrian bridge which spans quiet Swatara River and noisy Interstate 81.

I start slowly the climb of the ridge. My calf is a little stiff but it doesn’t hurt anymore. At the top of the ridge, I feel confident that it has been a minor injury, a warning to listen my body. A pain is always a signal that something is going wrong; in my case an excess of speed due to an irrational exuberance that I can cruise at three miles an hour on a treacherous field.

As I ponder risk and wisdom, a voice comes from the woods. That voice is not unknown. Suddenly show up two hikers on the trail. They are south-bounders. I recognize immediately the first one. It is the legendary “One Gallon”.

“Hi One Gallon, glad to see you again!”
“Oh I know you also.”
“Yes, we met three years ago on the Pacific Crest Trail”.
One Gallon quickly remembers our encounter at Marble Mountain, in Northern California.
“Ah yes, you’re the French guy I met when I accomplished the circumnavigation of the globe”.
One Gallon had walked 26.000 miles (40.000 kilometers) between 1982 and 2005.

Suddenly I realize that I have ignored his young partner. I shake his hand with gusto to apologize. He is eighteen years old and has lived all his life in a small town in Maine. Hiking the Appalachian Trail is his first foray in the world…

Back to One Gallon, I am impressed by his strong torso. He gives me an explanation. In 2006 he engaged in another incredible adventure. He wanted to enact the commemoration, for its bicentenary, of the overland expedition of Lewis and Clark (1803-1806). With its modest means, he paddled aboard a canoe the Missouri River from Saint Louis to its headspring in Montana. Arrived at the monument of Lewis and Clark, he carried his canoe, with the help of a trail angel, through Lemhi Pass, to the other side of continental divide. At the crossing of Lehmi River, he resumed his paddling to the mouth of Columbia River at Astoria in Oregon.

I told him that I have written an article about his fate in a French speaking gazette. We celebrate our encounter by a picture and an exchange of email addresses.
I invite him to join me next year at the annual zero day kick-off party at Lake Morena. (1) The party celebrates the start of hikers at the border of Mexico. Unfortunately I could not go to Lake Morena in spring. I hope to be there in 2010, ten years after my first foray on the Pacific Crest Trail.

One Gallon hopes to be home to celebrate Thanksgiving. Due to an early snowfall in Great Smoky Mountains, he was forced to slowdown his pace. He arrived at Amicalola Falls a week before Christmas; the southern terminus of Appalachian Trail is in Georgia.

Where will he be next year? Nobody knows including himself. An adventure is no more an adventure when too much planed.

I check my watch. We have talked for an hour. Time goes fast when in good company. We wish ourselves a safe trip. I don’t know when our paths will cross again but it will happen. I am sure of it as hiking long trails is our favorite pastime.

Are you French Bob? We are PCT section hikers, and when we mention to other hikers that we hike in France (GR 653 this year), they ask if we have met French Bob.

I don't know French Bob and I also don't know GR653 but I do know the Pacific Crest trail and the Appalachian Trail. The network of trails in France is unbelievable but none of them exceeds a thousand miles.