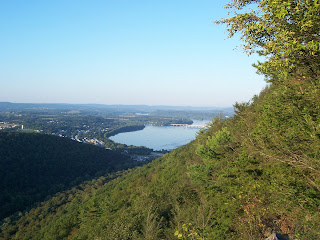 Susquehanna River and the town of Duncannon

I have slept twelve hours in a nice bedroom at Gelinas Manor. From my window I can see geese, ducks, swans and other smaller birds swimming on nearby Children’s Lake. The lake in downtown Boiling Spring was formed by partially damning the brook fed from thirty springs, including one nicknamed the “bubble”. Indeed the water sparkles to the surface, at a year round-temperature of 52°F (11°C), from caverns that are two thousand feet (610m) below the surface.

Yesterday I could not read more than fifty pages of “Profiles in Courage” from John Fitzgerald Kennedy. I am frustrated but I don’t have time to read on the trail. Since Harper’s Ferry I am carrying a book in my backpack: “La Route des Flandres” from Claude Simon. I can’t concentrate on the story. The culprit: too many miles or an uninspiring story? Well may be both. I decide to leave, in this house of culture, the book written by the 1985 Nobel laureate of litterature. In less than a month the jury of Stockholm will award the prize to another French writer: Jean Marie Le Clezio. Excuse my ignorance if I confess you that I have never read a line from him!

Kitty is preparing me a nice breakfast with Florentine eggs. Leo is reading the local newspaper on the porch. I hurry up. Today is another big stage. Duncannon is twenty six miles away. Despite a late start at 9 am, the first fifteen miles are the easiest ones of the entire Appalachian Trail. It goes through Cumberland Valley, a busy one of Pennsylvania. It is grid-pattern with Pennsylvania Turnpike, two railroad tracks, US-11 and plenty of county roads.

At the corner of Main Street I stop to pay homage to a local hero. Sergeant Randall Shughart (1958-1993) was a US Army special forces sniper. He gave the supreme sacrifice during a rescue attempt of a downed helicopter pilot in Mogadishu in Somalia. He was awarded posthumously the Medal of Honor. After the failed operation, the Clinton administration withdrew its troops from Somalia. A book and a movie "Black Hawk Down" related the tragic incident. People of Boiling Spring have not forgotten the sacrifice made by one of them. They honor sergeant Shughart with this memorial.

The trail meanders through corn fields. I meet daily hikers alongside that easy section. The opportunity to eat at a restaurant on US11 pervades my soul. Is it right to do so? I have hiked eight miles in three hours. Will I be able to cover eighteen miles in the afternoon? Will I arrive before dark in Duncannon? All these questions are secondary to a hungry through hiker. Hungry is redundant as a long distance hiker is always craving for a good meal. So I quit the trail at US11. According to the databook, Middlesex Diner is 0.4 miles away. It is sharp noon when I enter the restaurant. Some clients are having a late brunch. I order a prime rib. I get back at the overcooked one I’ve got, last night, in Carlisle.

Half an hour later I hit back the road. Back in the wood I appreciate the shade of trees. It is 75°F (24°C) and muggy. I sweat on the foothills. At the last crossing the trail is diverted. Road workers are building a foot and equestrian tunnel. Back in France, I will read the opening ceremony of the tunnel in the Appalachian Trail Journeys. I am too early to enjoy a safe crossing.

I climb as fast as possible Blue Mountain. Darlington shelter is on the ridge. Its spring is dry. Will I have enough water to go through to Duncannon? Another concern is seeping through my mind. It is time to use again the poles. Downhill on four legs is better than on two.

At the crossing of Fishing creek I am thirsty. I dare to drink unfiltered water. The trail resumes a steep climb to Cove Mountain. I sweat and gasp in muggy afternoon. Nearly to the top, I slow down while crossing a field of slabs. Unfortunately it is not a field as I guess; the entire crest is covered of treacherous rocks. It won’t stop for five miles. The easy southern section of Pennsylvania is over. Now starts the horrendous one till Delaware Gap, which is one hundred and fifty miles north of Duncannon. My misery index ends momentarily at Hawk Rock, which offers a splendid view of Susquehanna River.

In the glowing rays of sunset I take a picture of the mighty river and the town of Duncannon nested on the bank. At dusk I reach the entrance of Duncannon. The town is derelict. It epitomizes the rust belt and its citizens left behind. I check in at Doyle hotel. The landlord couple is very friendly to hikers. Room is $25 only. The hotel is a landmark. It was built in 1900 by the Anheuser Busch family. It has lost its luxury but not its soul. The mahogany ceiling attests its former glory.
Publié par Bernard Martoïa à l'adresse 16:36