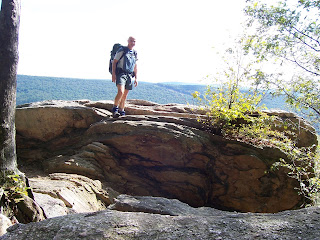 The wife’s manager of Doyle Hotel wants my picture (like every hiker) for the record. She is using a Polaroid. I put a smiley face. Once achieved, she offers me a beer. I decline tactfully as I am too thirsty. I beg for water. She fills a big glass and I gulp it. Since mid afternoon, I have not drink at all. I’ve also walked twenty six miles in just eight hours. The traditional picture remembers me another one well alive on the Pacific Crest Trail. At Vermilion Valley resort at Edison Lake, which is a couple of days south of Yosemite National Park, hikers are honored to have their burned an dirty face printed for the record. As Duncannon has nothing to offer to a tourist crowd, people are friendly to the few hikers who stop in town.

The Thru-Hiker’s Handbook mentions an Italian restaurant. I dream of fancy food and Barolo wine. Sorrento’s restaurant has only its name to offer. It is a tiny fast food with limited supply. Back to reality I cross Main Street and venture to the Pub. There are more TV screens (no less than twelve after checking) than clients. I order crab cake and white wine. While fans wearing baseball hats watch their team, I write my diary… I am not familiar with games to break their religious fervor.

Back to my room nested on upper floor and at the very end of corridor (I have been warned to let open the emergency door giving access to rusty fire stairs by a concerned manager who can’t afford to renovate its derelict building) I crash as soon as I turn off the light bulb.

Morning is busy as usual in town. First thing to do: breakfast or laundry? I bet for laundry. It is a wrong start as I don’t have any change. I am going to Goodie’s restaurant to get a wad of quarters. In three shuttles I manage to eat breakfast and get my clothes washed and then dried.

Goodie’s restaurant is the place for breakfast. I eat two eggs, bacon, sausage, home fries and four toasts crammed with jelly. I also drink two quarts of orange juice and plenty of coffee. The check is only $12. I love it! Breakfast is the most important meal for a long distance hiker. With a full breakfast I can hike a dozen miles without any stop to refill the tank.

For approximately an hour, the Appalachian Trail is no more a trail. It follows a paved road alongside Susquehanna River. At 444 miles long, it is the longest river on the American East Coast. The name of the river comes from an Indian phrase meaning “mile wide, foot deep” referring to its unusual dimensions. A giant bridge links the two banks. In fact, it spans first over Juanata River, a tributary, and then straddles Susquehanna River while making a long curve. I follow the pedestrian path, which is protected by a three feet high concrete wall. My ears are rattling with the screeching noise of traffic. The bridge is named for Daniel Clark, who in 1785 operated a ferry service here.

Just after the bridge, the trail goes back to the secluded woods. It climbs a steep ridge. I am going easy as I have not yet digested my huge breakfast. The trail veers momentarily to the south. From a notch I say farewell to Duncannon and mighty Susquehanna River. After the crest of Peters Mountain the noise of traffic subsides. For the remaining of the day I will follow the crest going North West.

Around noon I meet my first rattle snake on the trail. I nearly walk over! The beast is warming me up on the trail. I have time to take a picture before it escapes. Shortly after that unpleasant surprise I run into an old woman. She carries a light backpack. Later I meet her husband on the trail. They hike at their own pace.

The trail cuts road PA225 at a nearby radio tower. There is no spigot at the parking lot. In the middle of afternoon, my reserve of water is empty. Am I a fool? In fact it is a calculated gamble. Carrying extra liters of water slows down my pace. I am also concerned by my injured shoulder. I stop at Peter Mountain shelter. A jolly hiker welcomes me.
“Is there any water in the vicinity of shelter?” (There are two filled bottle on the table)
“If you don’t mind going down 700 feet from the crest… It took me a while to climb back“
“How long?”
“Half an hour!”
Just to check the accuracy of his saying, I venture to the faint footpath going down to the spring. The slope is very steep. I come back to the shelter. The guy offers me a liter. I turn down his offer as I assume my choice of going light. My goal is to reach Clark creek before dark. It is six miles away. I check my watch: four o’clock. It is doable. I say farewell to my fellow hiker and resume a fast pace.

The trail meanders up and down the undulating crest. The highlight of that uneventful stage is Shikellimy Overlook. I stop to take a picture of myself with the help of timer. I am at the junction of Shikelllimy trail which goes straight down to Clark creek. My trail goes further on the crest. Around 6pm, the trail finally veers down to the right. I stay concentrated in the steep downhill. I cross an empty road and just after a bridge over the creek.

According to the data book, there is a good spring 0.2 miles after the creek. I reach it in the last rays of sun. Water is seeping from several branches. I manage to watch myself in a stream formed by several gullies. Mosquitos bother me when I set up the tent. I hurry up. I am very happy to cook diner. Suddenly comes out a young boy. He is moving very fast.
“Where are you going at that late hour?”
“I don’t know; it is my first day on the trail.”
“But there is no water on the crest” I add.
My answer doesn’t dissuade him to go further. Soon darkness will catch him.
He dashes off. I’ll probably see him tomorrow on the trail.

At the flashlight, I write my diary: “Today I have covered only 17.4 miles but I have stopped at the best campsite nearby a spring alongside a moderate stage.”
That kind of happiness might seem desultory to those who have never spent a night in the woods.
Publié par Bernard Martoïa à l'adresse 19:32