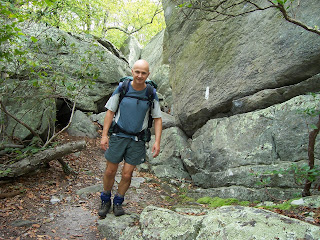 After chatting with young South Bounders at the general store on Pa-34, I resume my hike. The sky is clearing during the afternoon and temperature reaches 72°F. I sweat when the trail is steep. At the top of Rock hill, the trail rambles through huge boulders. Twenty years ago, I would have liked to climb them. Rock climbing was my favorite sport. Not any more as age is taking its toll. I was supple, I am frail, I was daring, I am cautious.

The two young guys met last night at Iron Masters warned me of a challenging roller coaster before reaching Cumberland Valley. From the top of a hill, I discover that valley and its open fields. There is no respite during a couple of hours. I need sometimes to grasp a branch to avoid a fall. The builders of the trail have explored all the difficulties. The young guys needed two days to cover the twenty miles between Boiling Spring and Pine Grove Furnace. I find solace to cover the distance in one day only. Even arthritis to my left knee does not slow down my pace to Boiling Spring.

When I reach Cumberland Valley, the trail meanders through open fields. I get lost at a fork. I thought the trail was crossing a railroad track. I retrace half a mile to the missed junction. I did not see a white blaze. In fact the trail skips the railroad track till the entrance of Boiling Spring. The town gets its name from the well springs, the most prominent of which is known as the “bubble”. A two arches bridge spans Yellow Breeches Creek. The stream is slow in late summer. A beautiful lake lies in downtown. Swans and ducks parade separately on the pristine water. I ask the address of a bed& breakfast to a young fisherman. He is of no help. A few yards on the shore of the lake, an old man suggests me to stop at Gelinas Manor.
“Where is it?”
“You’re nearly there”, said the old man showing me with his arm the direction.

It is a Victorian house near the lake. I ring the bell. An old and stiff man opens the door. There is vacancy. He invites me to enter his home by the back door. In the garden lay the track of a miniature railroad. He summons me to leave my backpack and my shoes in the winter terrace. The house is like a museum with plenty of ravishing miniatures of locomotives and cars. We go upstairs through a thick carpet. The small bedroom is well enough for my taste. I understand his reluctance to welcome dirty hikers in his adorable home. I agree to spend a night.

After a shower, he invites me to join him with his wife to a restaurant. I accept gladly to share a meal with the old couple. Kitty, the wife, is more talkative than her husband. We drive to Carlisle, a town six miles away. It is only 5pm but the restaurant is filled with local customers. I need proteins. So I order a porterhouse. I am disappointed by the cooking of the meat: it is well donned instead of raw. Kitty notices my disappointment and suggests me to ask another piece of meat. I turn down her offer. I don’t want to spoil their meal while being fussy. I make do with coleslaw and cooked vegetables.

Lee is not talkative. He eats silently while his wife engages in a long conversation with me. We have common ground in journalism and politic. Kitty was a freelance television reporter in Washington. She has met congressmen and presidents. She is a fan of Ronald Reagan. I ask her opinion about the impending election. She considers Obama too inexperienced for the task. I agree with her. McCain is leading in the polls. I don’t know yet the fall of Lehman Brothers which will turn the tide in the last remaining weeks of the campaign.

Back to their house, she invites me to pick up a book in her beautiful library. I spend a good time to check the titles. Finally, I pick up “Profiles in Courage” of John Fitzgerald Kennedy. She said it is a good book. She wants my opinion at breakfast time. “What time do you want to have it?” It is an embarrassing question. I am an early bird on the trail. Knowing her reluctance to wake up early, we agree for eight o’clock.

The bed is too cozy for my worn out body. The introduction of the book is excellent. Kennedy explains that fresh congressmen want to change the world but quickly learn to adjust their will to the majority. After fifty pages, the book falls of my arms. I yawn my head off. It is not yet dark outside when I fall asleep. Hiking twenty miles a day or reading late, I can’t do both.
Publié par Bernard Martoïa à l'adresse 16:08