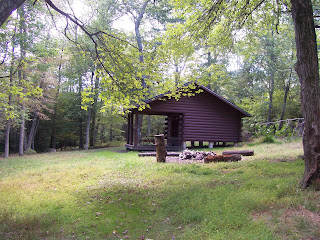 The night has been hot. I have slept with only a sheet inside the tent. I wake up at day light. An hour later I am ready to go. Lisa, my hospitable neighbor, is still asleep when I leave camp at 7.20 am. On the bench of Conococheague River I see anglers fishing with fly. With a snap move of their wrist they throw the line in the middle of the stream. The trail meanders through beautiful Caledonia State Park. At the crossing of a wooden bridge I meet a happy boy who has caught a carp. The fish is as big as his arm. He is proud of his catch. I congratulate him.

The junction with the Appalachian Trail is at the very end of the park. It is a beastly start with steep staircases right up to the top of the hill! I take it easy with a stage of twenty miles. At the top of the hill the noise of traffic ceases suddenly. I won’t meet anyone today on the trail. A strange quietness reigns like before a storm. The storm in question is not happening in the woods but at Wall Street. Lehman Brothers is bankrupt today. I won’t hear the news before a week. Being in the woods insulates me from the turmoil of the financial world.

The stage is uneventful and of moderate difficulty. I stop for a snack at flowery Quarry Gap Shelter. Suspended pots of petunia welcome visitors. Is there an innkeeper in the vicinity to take care of such flowers? It is always a surprise to find a clean and well maintained shelter. Further on in Pennsylvania and New Jersey I will discover ugly painting’s spray made by hooligans.

It is already 77°F (25°C) Indian summer is the best time for hiking. Bugs, flies, mosquitoes and ticks are no more an annoyance. There is a short window before the first frost of October. Time seems suspended for a while. The Appalachian Trail is a long corridor insulated from hunting. Sometimes a forlorn shot or a high flying plane is heard.

While having no one to talk with or nothing special to watch around me I grind miles at a steady pace. Is my soul at peace? Sometimes the body is totally disconnected from the brain. Legs and arms move relentlessly on the narrow path in the forest. They repeat the same gesture thousand times a day. Who is in charge of that endless process? The forehead is the buffer zone which trades hundred signals. Other parts of brain are idle or free to do what please them. Old events come back to life. I remember a day at the beach when I was eight years old. At work or home we don’t have the luxury to let our mind ramble. Hiking is the best way to burst one’s fetter. Without any effort, old and deeply buried souvenirs percolate to the surface. I pull the thread and another souvenir comes back to life. Old and often disconnected events are whirling.

During the day, I go through to no less than five shelters. A record! In fact, they are close from each other. I take a picture of Birch Run Shelter and its serene prairie. It is pleasant to sit while having a drink. Sometimes, I read the log of hikers left inside the shelter. The sheer diversity of hand writings is more appealing than the content of stories. Some are light, other bold, some are slanted, other upright, some are narrow, other wide. A handwriting gives a lot of information about people’s character. After many years of typing on keyboard, I am unable to write properly. I can’t translate the staccato rhythm of typing to a page. I am frustrated. Writing requires more skills than typing.

I have entered the Michaux State forest. It is named in honor of André Michaux, a French botanist, dispatched in 1785 by Louis XVI, the king of France, to gather plants for the royal gardens. With the help of his son, Michaux discovered and identified a host of flowers, shrubs and trees. At the peak of industrialization, the forest was operated by iron companies. Three furnaces were built at Caledonia, Mont Alto and Pine Grove Furnace. Cannon balls were produced during the Revolutionary War. The iron companies needed large lands from which to cut wood that was converted to charcoal and used to fuel the iron furnaces. The forest was destroyed at brisk pace. It was saved when iron companies couldn’t compete with new technology and richer ore deposits discovered in the West. In 1903, the Pennsylvania State Forest Academy was established at Mont Alto. The president of that time was Teddy Roosevelt who was concerned to preserve natural resources for future generations. Today the Michaux forest comprises 85.000 acres or roughly 3440 km².

In the middle of afternoon, I am surprised to arrive at Pine Grove Furnace. This tiny village has preserved its old furnace. The town has the honor of being placed half way through the Appalachian Trail. It is located at mile 1088. To celebrate it, a custom has been made at the local grocery. Hikers are supposed to eat half gallon of ice cream. I am bared of that challenge. The grocery is closed. Outside two girls and a guy are asleep on wooden benches. My appearance wakes them up. They enjoy a lazy afternoon in the sun. They tell me that the owner of the grocery is gone. Bad luck! The guy warns me of the stage after tomorrow. It has the particularity of being hold in open fields. He suggests me to hike at night! Is the sun unforgiving in mid September at 40° north of latitude? Yes, for some people. Like fonts and handwriting, the world is fascinating for its sheer diversity of characters.
Publié par Bernard Martoïa à l'adresse 12:41