half a gallon of ice cream challenge 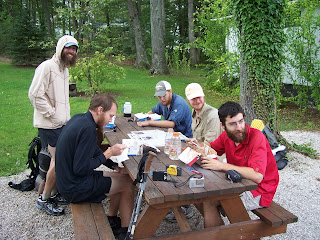 Ironmaster’s Mansion Hostel at Pine Grove Furnace opens at 5pm. It is a splendid brick house with a large terrace. The house was built in 1820. As its name suggests, it was the house of a former boss. Jackson Fuller operated the furnace of South Mountain Ore. The company was owned by Jay Gould, a robber baron of Wall Street.

I wait outside patiently on the covered terrace. I write my daily log. At 5pm, I dare to ring the bell. The manager welcomes me. He said I should have come earlier. The lobby is the nicest room with its piano and antique maps from eighteen century. Monday night is a respite for the manager. He had seventy guests during the weekend.

I will sleep with two young hikers in a dormitory on the first floor. They show up. One is limping. He has a huge blister at the heel. He asks my advice. “You need a bigger size.” The answer doesn’t appeal to him. His shoes are brand new. It’s a typical mistake made by an inexperienced hiker. Later after dinner, they ask my advice on several subjects. They are amazed by my ultra light equipment. They carry a rope, three gas canisters and other ludicrous items. As they are high spirited but also unable to discard their equipment, I suggest to replace an item every year, starting with the most cumbersome.

The young blond guy has a big scar at the neck. I venture to ask him the reason. “I have got a cancer!” The answer breaks my heart. How such a young man might be afflicted by a dire disease? One of my colleagues died in 2005 from the same cancer at the Lymph nodes. He was operated successfully but, three years later, the cancer came back… I don’t sleep well in the dormitory. The lone wolf prefers its tent. At day light, I am eager to leave the house.

The sky is overcast this morning. Fog lingers on Fuller Lake. Its artificial sand beach is cordoned off. It is the end of summer. At the end of Pine Grove Furnace State Park, I resume the trail in the wild. Soon I hit half way marker. It is a triangular wooden structure. Due to relocation of the trail, the actual half-way point is two miles south. To stay accurate, the marker would have to be put on wheelbarrow and moved every time a new reroute is opened. Later in Vermont, I will discover a new reroute which eschews the ski slopes of Killington. Nevertheless, I am happy to be half way on the trail linking Georgia to Maine.

Eight miles later I want to stop to a general store on PA 34. I would like to buy a drink. At a table outside the store, six garrulous young nerds are eating ice cream. They are south bounders. As they are aware of the closing of the store at Pine Grove Furnace, they want to replace the challenge here. It is a silly tradition for through hikers to eat half gallon of ice cream. The one, who has completed the challenge, is going back and forth to the toilet. He has got a diarrhea. The others are laboring painfully. One can’t stop shivering. Whatsoever the price for their health, they want to clean up their box. It is a matter of honor. While they scoop out and gulp, I drink a Gatorade in their company. I love carbohydrate drink. It gives a boost on the trail.

To these young nerds, I ask them if they have heard of One Gallon. Of course not! They weren’t born in 1982 when a guy from Des Moines won the challenge while eating a full gallon of peanut ice cream. My listeners are sick to hear a guy might gulp it. The choice of peanut butter ice cream is a hard one. The taste is horrible. I met One Gallon in 2005 on the Pacific Crest Trail, in northern California, at Marble Mountain. The day before, he won the pancake challenge at Seiad Valley. If you are able to eat five huge pancakes, each one weighting a pound, in less than two hours, the meal is free for the winner. One Gallon wasn’t sick. He is the strongest guy I ever met on the trail.

The day I met him he was elated for a special reason. “Tomorrow, I will have circumnavigated the globe!” Yes, One Gallon had hiked 40.000 kilometers in twenty three years. I dedicated him an article in a French gazette as he epitomizes the spirit of sheer freedom. One Gallon works double shift in winter time. With the doll spared, he takes, each year, a six month leave to hike the trail. The year I met him in California, he left earlier his seasonal job. In February, he started hiking from San Francisco to the Mexican border. There he congregated with hikers at the annual day zero pacific crest trail kick off at Lake Morena. This huge party celebrates, every year, the start of hikers to their long journey toward Canada. The eleven one will be held on April 24th through 26th. If you like to hear great stories, that’s the place to be. So long!
Publié par Bernard Martoïa à l'adresse 15:14