The new bank rescue is doomed! 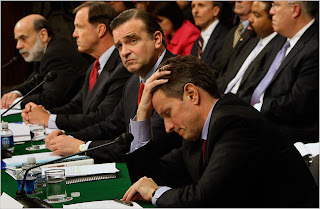 
President Obama’s long-awaited plan to revive the banks could work if certain assumptions about the future are right. But there is not much, beyond faith, to believe those assumptions will pan out — and even if there were, it is hard to see how the plan is the best way to go.

In the near term, the plan would provide financing to buy $500 billion of banks’ bad assets — and possibly up to $1 trillion over time. Most of the financing would be in the form of low-cost government loans and loan guarantees for private investors who buy the troubled assets.

The first assumption is that those battered assets will recover handsomely, thus allowing the government loans to be repaid with interest. There has, however, been no independent assessment of the assets or their underlying collateral, so there’s no way to know that they will recover by much, if at all from their beaten-down state.

The Times has reported that investors are currently offering 30 cents on the dollar for certain toxic assets. Banks are unwilling to sell at that price, but that doesn’t mean the offer price is too low. It may only indicate their fear that taking such losses might render the banks insolvent. With government subsidies, investors will presumably offer a price that is more to the banks’ liking. But that, in turn, could expose the government to big losses. Government loans are huge compared with the sums that investors must put up, so even a modest decline in the value of the purchased assets would endanger repayment of the loans.

Even if we assume that the assets do increase in value, allowing the government to be repaid, there are still unsolved problems.

Successful sales will rid banks of some of their toxic assets, but not necessarily all or even most of them. To restore the banks to health, the sums expended would have to be enough to balance the banks’ assets and liabilities, and provide a reasonable cushion to resume lending and absorb future losses. No one knows with any certainty how much that is, though some estimates put it north of $2 trillion, much more than what the administration is contemplating.

And even if you assume that the sums put up by the government are enough to cleanse the banks entirely, restoring the banks to health by throwing money at them — even with a sheen of private capital — would not be fair. It would be one big transfer of wealth from the government to bank investors. That would be better than an apocalyptic crash, but it is a near complete socialization of losses, with little value flowing to taxpayers.

A better way would be to base the rescue on current reality, not assumptions about the future. What would an examination of the banks’ assets reveal about their value? What is the size of the hole in the banking system? In the absence of good-faith measurement, taxpayer-financed purchases of bad assets could court huge unnecessary risks.

In other banking crises, both in this country and abroad, resolution of a systemwide problem has sooner or later involved separating solvent banks from insolvent banks. In the end, there is no getting around firing the executives at failing banks, acknowledging the losses, wiping out the shareholders and then deciding how the government can best restructure the institutions. The Obama administration has yet to explain why its approach is better than that.
Publié par Bernard Martoïa à l'adresse 03:17